Oversized glossy Magazine V is always out to provoke dialogue or, some would say, shock the Confederacy. THE LEGEND OF NACHA GUEVARA: Argentina’s age-defying star of stage, screen, and song

But its new "Who Cares About Age Issue" featuring a trifecta of sophisticated cover girls — Sigourney Weaver, Susan Sarandon and Jane Fonda — is actually surprising. Why? Because we're so used to "age" issues in women's magazines featuring rosy-cheeked 30-somethings -- think Cameron Diaz and Gwyneth Paltrow -- perhaps with a token 50-plus woman folded into the back pages.

Fonda, 72, affects "Dynasty" glam in a Dolce & Gabanna leopard-print top and a cocktail ring the size of Las Vegas. Sure, she's strategically airbrushed, but so is Kate Moss. And correct us if we're wrong, but she might be the first septuagenarian to grace the cover of an edgy fashion mag.

Weaver, 61, plays up her androgynous beauty in a playful baseball cap worn over slicked-back hair, serious lipstick and a perforated dress by Alexander McQueen. Sarandon, 64, channels her "Witches of Eastwick" look (and challenges convention) with her tangle of curly red hair. Her outfit: spectacular drop earrings by Fred Leighton and nothing else.

Other mature women featured in the issue include 64-year-old Charlotte Rampling; Argentine singer and theater actress Nacha Guevara, 70; Eve Fletcher, the 83-year-old amateur surf star; and 86-year-old Gloria Vanderbilt. It's about time these veteran beauties get their due. 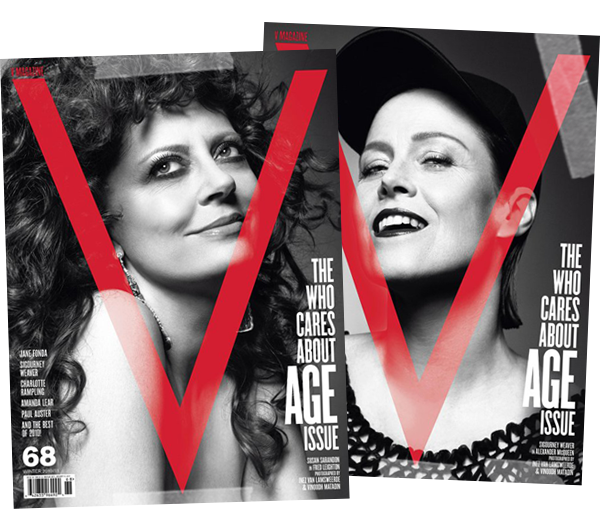 PARTY PAGE
From Manhattan to Paris and every fashion week in between, V love it all!

SECOND COMING
Barbara Hershey is back in Black (Swan, that is)

EXTRA
Photography, fragrance, and the next big everything

THE LEGEND OF NACHA GUEVARA
Argentina’s age-defying star of stage, screen, and song

FOREVER YOURS
The chicest ways to carry on

BEST OF 2010
Twelve months of standout moments, by V and friends

V-MAIL
Multigenerational men and women we’d like to meet